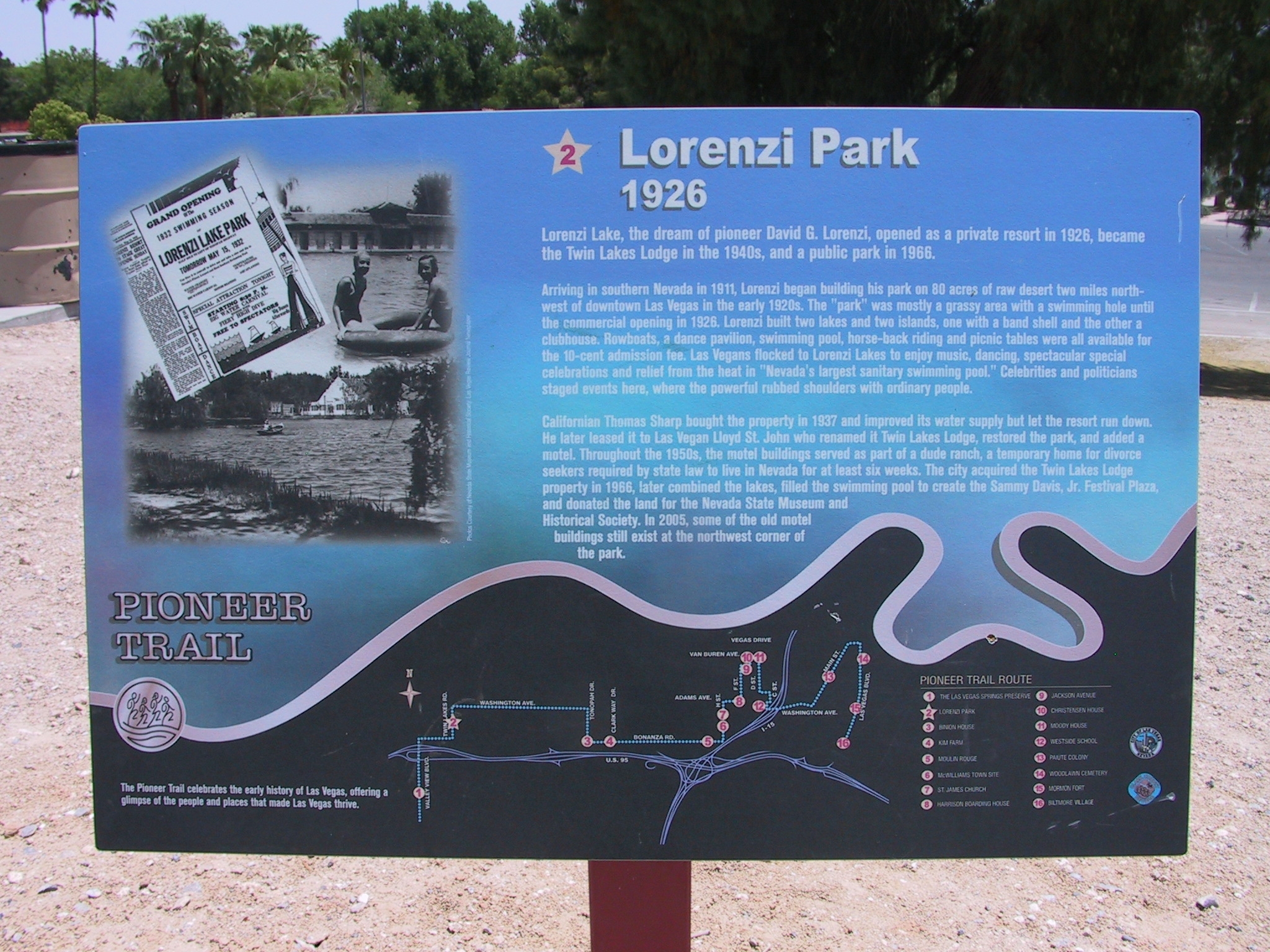 Lorenzi Lake, the dream of pioneer David G. Lorenzi, opened as a private resort in 1926, became the Twin Lakes Lodge in the 1940s, and a public park in 1966.

Arriving in southern Nevada in 1911, Lorenzi began building his park on 80 acres of raw desert two miles northwest of downtown Las Vegas in the Early 1920s. The "park" was mostly a grassy area with a swimming hole until the commercial opening in 1926. Lorenzi built two lakes and two islands, one with a band shell and the other a clubhouse. Rowboats, a dance pavilion, swimming pool, horse-back riding and picnic tables were all available for the 10-cent admission fee. Las Vegans flocked to Lorenzi Lakes to enjoy music, dancing, spectacular special celebrations and relief from the heat in "Nevada's largest sanitary swimming pool." Celebrities and politicians staged events here, where the powerful rubbed shoulders with ordinary people.

Californian Thomas Sharp bought the property in 1937 and improved its water supply but let the resort run down. He later leased it to Las Vegan Lloyd St. John who renamed it Twin Lakes Lodge, restored the park, and added a motel. Throughout the 1950s, the motel buildings served as part of a dude ranch, a temporary home for divorce seekers required by state law to live in Nevada for at least six weeks. The city acquired the Twin Lakes Lodge property in 1966, later combine the lakes, filled the swimming pool to create the Samy Davis, Jr. Festival Plaze, and donated the lang for the Nevada State Museum and Historical Society. In 2005, some of the old motel buildings still exist at the northwest corner of the park.

Lorenzi Lake opened as a private resort in 1926 with a clubhouse, swimming pool, horseback riding and picnic tables. It became the Twin Lakes Lodge in the 1940s and served as a dude ranch for hopeful divorcees during the 1950s. The city acquired the park in 1966. As of 2005, some of the old motel buildings still existed in the northwest corner of the park. The park is listed on the city of Las Vegas Historic Property Register.